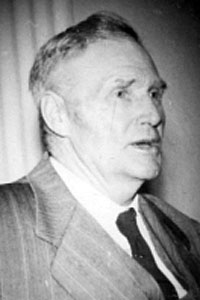 James Rea was born in 1882 in the Minniska District. He was educated in the Minniska and Russell Schools. James married Nell Burden in 1917. The Reas moved to Russell in 1947 and later sold their farm.

Mr. Rea raised Clydesdale horses, his source of power to work the land. He also raised purebred Shorthorn cattle and was a member of the Shorthorn Breeders’ Association. James grew corn, and sunflowers, and mixed grains. He had a silo on his farm and was constantly experimenting on various silage mixes.

James was a long-time member of the Russell Agricultural Society, serving as president for 25 years. He was Justice of the Peace; councillor for 10 years; Reeve of the Rural Municipality of Russell for 29 years (presented with a silver tray for 40 years of service); member of the Urban Council of Winnipeg. He received the Order of Merit in recognition of valuable services to the Nation in Centennial year, 1967. James was also fortunate enough to be presented to both King George V and Queen Elizabeth.

Mr. Rea was another of those pioneers who worked throughout his lifetime to improve the lot of the farmer.