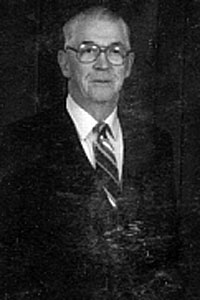 Mr. McCrindle was born on the farm in 1913 and has spent his entire life devoted to farming and to the community. George has been a member of the Canadian Seed Growers’ Association since 1945, and served on the Board of the Manitoba Branch for ten years – two as president.

Nearly all of Mr. McCrindle’s 1350 cultivated acres are in seed production. Some of the oilseed crops are sold to the Seed Trade, but most of the cereals are sold to local farmers. Several times George has increased seed for the Government of Canada and the University of Manitoba.

From 1961-64, George was enrolled in the Farm Business Group at Russell, taking a Farm Management Course. He was Reeve of the Rural Municipality of Ellice, 1957-61. He served on the Board of the Foxwarren Athletic Association when the rink was built in 1949 and continued that service for several years.

George served on the Foxwarren School Board from 1951-57, holding the position of chairman for a time. He served on the Board of the United Church from 1947-82; has been Sunday School Superintendent; member of the Masonic Lodge for over 35 years; District Deputy Grand Master of the Fifth Masonic District, 1980-81.

Mr. McCrindle is the first to offer help in a time of need. He spearheads most community drives that require canvassing for funds or organizing work gangs. He always offers support when there is a bereavement.

In spite of all the time spent in community work, he has made a name for himself as a farmer and seed grower. He is an individual who is in love with his chosen profession and this fact is very evident when one inspects his home and farm.