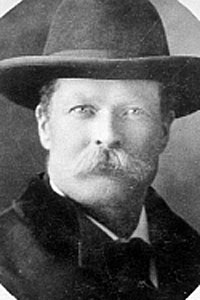 William McCreery was born and educated in Ballybay County, Monaghan, Ireland. He left Ireland in 1875 and landed in New York, continuing on to Huron County, Ontario. In the spring of 1876 he left Southampton, Ontario to travel west; going up the Red River to Fort Garry, on to Selkirk and from there to Whitemouth. At Whitemouth he secured employment with Sifton Ward and Company, contractors, who were building the CPR. Mr. McCreery walked from Whitemouth to Portage la Prairie and there he struck out again on foot for the Indianford district. It was here that he made his home with his wife, Rebecca Berry, whom he wed in 1877 and their son. Rebecca died in 1896 and William remarried in 1902 to Charlotte Berry. Three children were born to this marriage.

Mr. McCreery’s activities in life were confined mostly to farming; however, he always had the community’s interest at heart. In 1882, he was appointed the first assessor before the municipalities were formed. In 1894, he was successful in having a school built on his property which bore his name and for which he was secretary-treasurer for 30 years.

He was one of the founders of the Treherne Agricultural Society and acted as a director for many years. At the time of his heath in 1943, he was an honorary member. He was a supporter and director of the United Grain Growers and of the Manitoba Co-operative Movement.
In 1921, at the age of 65 years, he took a beekeepers’ course at the University of Manitoba and had the first apiary in the district.

Mr. McCreery took adversity, set-backs, and disappointments and good fortune in his stride; living the life of a true pioneer.