Nominated by: Norman Brown on behalf of the Manitoba Shorthorn Association 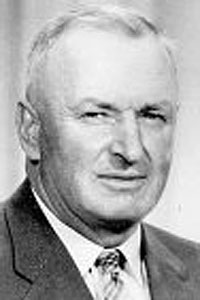 John Gordon Baxter Killoh was born in the Hamiota Municipality, the youngest of four children of Scottish parents Jane (Baxter) from Aberdeenshire and John Killoh, Banffshire. He received his education at the rural school of Ellenville, and later at the Agricultural College in Winnipeg. He and Edith Rothnie were married, and they raised a family of three daughters, Agnes, Lyla, and Edwina of whom they were justly proud.

Gordon raised shorthorn cattle on the “Ridgeview” farm. Many of the pedigreed animals from there formed the foundations of the herds in both Canada and USA. He learned to judge cattle and was sought out for local fairs and at the larger places. He judged at Brandon, Portage la Prairie, Saskatoon, and Calgary. He also showed cattle at the Toronto Royal.

His interests were many. In 1925 he helped organize a swine club. He taught young people how to judge cattle and how to take part in public speaking contest. In 1933 he helped to organize the McConnell Calf Club. The next year when the Swine Club was dissolved, he became the leader of the Calf Club and remained with them for eighteen years. He never missed an achievement day nor a local 4-H event.

Gordon will be remembered for his dedication, wit and wisdom, an apt response for any occasion, and for his hospitality and sincere friendship.