Nominated by: A.G. Gabrielle on behalf of the Rural Municipality of Wallace 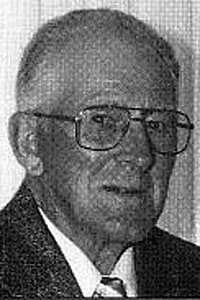 David Gordon Hutchison, son of William and Dora Hutchison, was born in the Rural Municipality of Wallace and received his elementary education at Montgomery School. Gordon married Eunice Mills on November 28, 1942, and together they raised three children, Russell, Lynn and Cheryl, on the family farm near Virden where the families continue to reside.

In July, 1931, Gordon started his outstanding program with purebred Aberdeen Angus cattle by purchasing four older cows with their calves. This herd was not dispersed until 1981, a period of fifty years. His son Russell continues to manage the cattle operation on the home farm. The Avalawn Angus herd became a major force in the industry because of its prowess at shows throughout Western Canada and also at the “Royal” in Toronto. Exhibiting cattle became a way of life for the Hutchisons, where many of their animals won honours at fairs and bull sales.

However, the cow, Ethel Lee, born April 2, 1918, was particularly noteworthy. “Miss Lee” was a major factor in the development of this Angus herd because many of her progeny won honours and ribbons in the show ring. “Bandolier Quiet Lad” received great publicity, based on the “bull in a china shop” legend.

To list the exceptional awards and championships that Gordon acquired during his 50 years of exhibiting cattle would fill volumes. However, it should be noted that an Avalawn bull was a class winner at 18 summer shows in 1972, and that Gordon was the only Manitoba breeder to have a champion bull chosen three consecutive years at the Manitoba Angus Futurity Shows from 1953 – 55.

The outstanding herd of purebred Aberdeen Angus cattle, established and developed by the Hutchisons, had been sold throughout Western Canada and Ontario and to foreign markets in the United States, Mexico and Korea. Thus, the Angus breed had been immeasurably improved and propagated through the 50 years of hard work and foresight that Gordon Hutchison exerted on its development.

Besides making major contributions to the cattle industry, his leadership qualities were put to good use in the local area, where he has served actively on the Virden Agricultural Society Board and worked with 4-H youth at showing and judging workshops.

He is an involved family man who is supportive of and committed to his children and grandchildren.