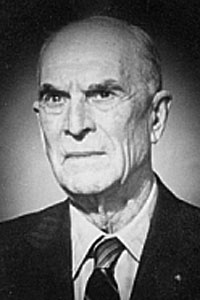 Wilfred Albert Samuel Beattie was born in Township Mara, Ontario, near Orillia on April 20, 1902. Wilfred came to Douglas, Manitoba in 1906 and to Roblin in 1908, moving to Makaroff in 1909. He received his education in Roblin and Makaroff.

In 1932, he married Helen Lindsay and together they raised a family of four daughters and one son.

Mr. Beattie built his first Gravity Blanket Cleaner in 1933 and proceeded to make another fourteen machines. For some years he had the machines moving throughout the country cleaning grain on farms. In 1947, they were built at Cancade Brothers in Brandon. Some 4,600 cleaners were made and sold in Canada with another 800 being marketed in the United States.

The Beattie Wind Cleaner, which was an entirely new idea in cleaning grain, was patented in 1968. The patent was easy to secure as no other cleaner which would grade and clean grain according to weight and size had ever been patented. Other inventions marketed by Wilfred were: a screen and sieve machine that cleans rape out the other grains; a new patented harrow in 1975 – a stiff tooth stone trip harrow.